By Michael Foord - May 01, 2010
Visual Studio is the Microsoft IDE for Windows and is virtually ubiquitous as a Windows development tool. Unfortunately Visual Studio has never had good support for languages like Python, which became more of a problem for Microsoft when they developed and released a distribution of Python themselves (IronPython).

Whilst there have been many good IDEs with IronPython support there has until now been lacking from Visual Studio - and adding support has been the highest voted Visual Studio feature request for some time.

Adding good support for a dynamic language to an IDE is very different from supporting statically typed languages. The internals of Visual Studio rely on the static type information for the intellisense, designers, refactoring and so on. However, the IronPython team themselves have come to the rescue and built IronPython integration into Visual Studio 2010: 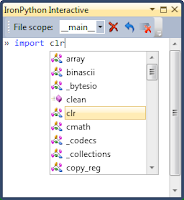 We are happy to announce the first broadly available release of IronPython Tools for Visual Studio.  IronPython Tools for Visual Studio (IPyTools) is a set of extensions available for Visual Studio 2010 which supports development of IronPython applications.  This release is still an early Community Technical Preview (CTP) and builds upon the preview release that we gave exclusively to attendees of PyCon 2010.  The release has been updated to run on the final version of Visual Studio 2010 and includes many bug fixes, performance improvements, and new features.
This release includes support for Intellisense including member completion, signature help, find all references, and goto definition.  It enables quick browsing of your code using the object browser and the editor navigation bar.  It has an interactive (REPL) window that enables the development of applications in an interactive way.  IPyTools supports lightweight development without a project as well as working with project files in the tradition of Visual Studio .  Opening a .py file causes IronPython Tools to model the code in the containing directory as an implicit project for Intellisense features.   There are project templates for console, WPF, WinForms, and Silverlight applications.  WPF applications support drag-and-drop UI development.  Debugging of Python applications works just like you debug other languages in Visual Studio.
Changes in this release touch on all the major features of IpyTools.  This includes updates to the interactive window, intellisense, the editor, and solutions and projects.  We’ve also made other small tweaks to improve the development experience.
The interactive window is one key focus of IpyTools.  This release continues to flush out the feature set of the interactive window.  We’ve added a new command to send a snippet of code from the editor into the file context containing the module's code.  We’ve added options to control evaluation of partial expressions for live-object intellisense in the REPL.  We’ve updated the key bindings to for explicitly navigating history in addition to the smart behavior of the arrow keys.  Also, the interactive window now supports calls to raw_input() and input().  Finding text in the REPL works now,in addition to a number of other bugs fixed to improve the overall experience.
This release also has many updates to intellisense.  We’ve increased the customization options for intellisense so you can now commit completions using enter.    There is an option to show the intersection or union of applicable members when multiple types can flow through the code where you are using completion.  Related to this, None no longer is considered to be in the intersection of members.  We’ve improved the analysis engine so that it now understands generators, yield expressions, calls to send on a generator, improved analysis of generic method calls, improved tracking of types through calls to list.append/pop/extend/insert, added support for * and ** args, improved analysis of imports, and significantly improved the performance of the analysis engine.  We’ve also cleaned up the display of a number of tooltips including more consistent display of signature completion.  We also better track calls on types vs. calls on instances.  Finally reference tracking has been improved to include accessing methods (not just calls), tracking references to built-in functions, and added support for some protocol methods such as __getattr__.  In addition to this a number of bugs have been fixed.
We’ve also improved the editing experience in this latest release.  This includes support for new commands such as comment/uncomment selection, goto matching brace, support for auto indentation, and highlighting matching braces based upon the current caret location.   We’ve added finer control over the editor experience, adding support for disabling outlining on file open.  And there are a number of small cleanups such as improving goto definition, making goto definition center the target line on the screen, and fixing method outlining which was improperly collapsing in some cases.
Finally we’ve made some small improvements to the solution and project experience.  This includes fixing basic issues such as double clicking on image files now opens them in the VS image editor, project and solutions no longer prompt for saving if they haven’t been modified, and we now properly hide hidden files in the solution explorer.  We’ve also improved the experience when invalid values are entered into project settings.  For the Silverlight templates we’ve fixed the issue where Firefox would be launched when IE was the default browser, and we now search for an empty port when launching Chiron for web projects.
Altogether this represents a significant improvement over the PyCon release in quality and functionality.  But this is still an early preview and as such you may run into issues, and we are looking forward to your feedback both on issues you encounter and the overall feature set.  Please see the spec doc for our current and planned features and feel free to comment on any of the contents.
We are still working on our final licensing terms for IronPython Tools, and as such this release is licensed under a temporary limited use license.  We hope to have nailed down the final licensing terms for the next CTP release.
- The IronPython Team

Popular posts from this blog

By Michael Foord - May 25, 2010
Another collection of IronPython and DLR related articles from recent weeks. Jim Hugunin: Modelling the World Jim Hugunin is a bit of a Python veteran. As well as being the creator of two implementations of Python (Jython and IronPython), he also started the Numpy project (back when it was called Numeric). Not long ago he was swallowed by Microsoft, who also took on the development of IronPython and turning it into the Dynamic Language Runtime. In this video interview Jim explains not only how he got involved in Python, but also what he has been up to recently. IronPython Tools for Visual Studio with Expression Blend One of the ways that .NET helps you separate your visual design from your application logic is through XAML; an XML based declarative language that can be used with both Windows Presentation Foundation (WPF) and Silverlight. Naturally there are design tools that will generate XAML. Visual Studio is one of them, but the best one is Expression Blend. XAML has features
Read more

Extending Abobe Flash Player and AIR with Python and Ruby

By Michael Foord - February 27, 2008
An intriguing blog entry about an Adobe experimental project. It is a C/C++ cross- compiler for the flash player and AIR. This means that you can (will be able to?) cross-compile the Python / Ruby/ lots of other language runtimes and then run them in Flash. The blog entry contrasts this approach to the DLR which requires the re-implementation of dynamic languages - hence IronPython and IronRuby. The project is already beyond proof-of concept, they even have Quake III cross-compiled and running in Flash. Extending Adobe Flash Player and AIR with C/C++ Cross-Compiler Quake 3 has already been ported to managed code , but this is even more impressive. Whether the Python interpreter can be cross-compiled to run on top of another runtime (with completely different basic types), without changing the language semantics at all, has yet to be proved - but it is a very interesting project. (It also means that Python/Ruby will possibly be enabled only by additional optional downloads - but don&#
Read more