Showing posts from April, 2010
Show All

PyCharm is a new Python IDE from the JetBrains team, still available only as an "early preview" (beta planned this summer). As well as the "usual features" for Python IDEs (debugger, syntax highlighting, projects and code navigation, code completion, testing and version control integration, etc) it has some nice features like django support, Python refactoring and support for IronPython. Some of the details of the IronPython support are on the PyCharm blog: PyCharm build 96.115 is available IronPython support . It includes the possibility to generate Python stubs for .NET assemblies, but for performance reasons the generation isn’t performed on project opening and needs to be triggered manually (press Alt-Enter on an import statement). This will allow for code-completion (intellisense) to work for IronPython code in the PyCharm IDE.
Post a Comment
Read more

A Good Mix 35: Visual Studio, WPF, a cross-platform Resolver One and IronJS (A DLR based Javascript) 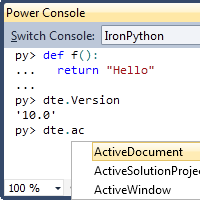 Another collection of IronPython and DLR related articles from recent weeks. Visual Studio 2010 Extension: IronPython IronRuby Console This extension adds IronPython and IronRuby to PowerConsole  so that you can interact with Visual Studio in IronPython/IronRuby. Please be aware that this extension only provides a simple tool to explore and interact with VS itself. It does not aim to be a development experience for the included languages. Tinesware: EasyWPF 0.3.93 An IronPython GUI library compatible with the Python GUI library EasyGUI . As the name implies, it is built on the WPF GUI library (making it Windows only). Like EasyGUI it has a demo app when you run the file showing the different controls/widgets the library supports. For more examples of how to use it visit the EasyGUI tutorial . Preview of the New Grid in Resolver One Resolver One  is a programmable spreadsheet written in IronPython. As well as being extremely powerful Resolver One is the largest codebase of Ir
Post a Comment
Read more

By Michael Foord - April 13, 2010
There have been three "IronPython relevant" releases in the last twenty four hours with another one to come. IronPython 2.6.1 (for .NET 2 and .NET 4) .NET 4.0 Visual Studio 2010 The next release is Silverlight 4, which includes new features like out-of-browser support, new controls (a rich text editor component), web cam and printing support and lots more. For those who still aren't aware, Silverlight is a browser plugin that works with Windows and Mac OS X and in IE, Safari, Firefox and Chrome browsers. There is an official port from the Mono team, called Moonlight, that works with Linux and Firefox. .NET 4.0 is the version of the .NET framework (and C# language) that includes support for the dynamic keyword - allowing for dynamic typing in C# and easier interoperation between C# and dynamic languages. IronPython 2.6.1 is the latest stable release of IronPython. Despite being a minor point release there are some very nice improvements and new features. Headline
1 comment
Read more

By Michael Foord - April 05, 2010
Professional IronPython is a new book on IronPython, published by Wrox and written by John Meuller  (who has apparently written 73 books). Create applications that are more responsive to user needs IronPython should be an important part of your developer's toolbox and this book will quickly get you up and running with this powerful language. John Paul Mueller clearly shows how IronPython can help you create better desktop or web-based applications in less time and with fewer errors. Throughout the pages, you'll find techniques for extending IronPython and making it a more robust language. In addition, you'll follow advanced steps such as building an IronPython extension that directly accesses the Win32 API. And you'll enhance your skill set as you introduce IronPython into other environments such as Linux® and Mac OS® X.       Professional IronPython is the third book on IronPython, with the first two being IronPython in Action and Pro IronPython .
Post a Comment
Read more
More posts